Mana, the Tree of Knowledge, and the Fall from Eden 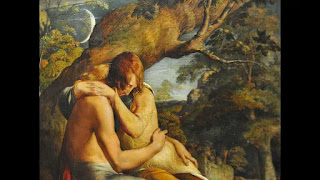 For a long time, the Story of Adam and Eve hand in hand with the advent of original sin and the subsequent Fall from Grace has been of great interest to me. In fact, I am not the only one who is puzzled/slightly obsessed with the Fall from Eden, nor is it limited to religious and philosophical discussions: various psychiatrists have tried to wrap their heads around this phenomenon, the alleged origin of humanity, and human sin. I have already expounded on different views and interpretations here, apart from my own thoughts and reflections, which, by the way, keep changing and are being modified as we speak or as I continue to read fascinating insights and theories on the topic.

I certainly enjoyed Erich Fromm’s discussion but that was before reading Otto Rank’s brief mention of Adam and Eve in his outstanding if at times confusing, confounding, and baffling book Psychology and the Soul. Fromm’s depiction of God as not-(already)-perfect but as always striving for perfection, a dynamic and constantly evolving being that is not fully shaped and formed was thought-provoking, to say the least. In that sense, God operates on a higher spiritual plateau, which is, in fact, not an endpoint in and of itself but rather a path that continues and evolves towards growth and fulfillment.

This view raises and opens up some interesting questions and observations for me especially after reading Rank. It could represent a potential shift or rift from monotheism to henotheism and would come closer to a gnostic reading of the Bible, in particular concerning the passages of Genesis. The assumption would be since God is not perfect, he may also feel threatened by other potentially superior or at least equally capable and competitive supernatural beings. In a sense, God would play and adopt the role of an impostor and would prefer to keep his creation unaware of this and make them believe that he is indeed the sole creator and ruler of the universe.

And that brings us to the tree of knowledge. My question is why would you put and build a potential source of temptation and conflict into your own garden? The idea that it is simply a test is rather naïve. And if it were so, why did God get angry and overreact? As an instructor, I know what it feels like when students fail to perform on the level that they are capable of, and worse if they cheat on exams. But it does not and should not amount to nor emanate in wrath and ire and dire punishment!

But what if God needed the tree for himself? This is where the idea of mana can come in, the divine food/fruit that is imbued with special powers. Mana is a spiritual life force or energy; in other words, it gives you power. It is essentially neutral so this power may be used for good or for bad. Some people are born with it, but it can also be cultivated, augmented, or transmitted.

In ancient Hawaii and in Tahitian culture, there are two opposing gods that thrive on mana: the god of peace and fertility represented by Lono and the god of war and politics symbolized by Ku. Regardless of their divine status, regular humans can gain mana through right, noble and altruistic actions generally referred to as pono. But one can also increase mana through the act of prayers and through the aid, help, and assistance of spirits, be they of ancestral or divine nature.

In fact, the concept of mana is not unheard of and has been designated in different shapes and forms by various cultures and religions. Basically, it has similarities with chi, the Chinese life force and it is also affiliated with mojo and Freud’s libido. It is interesting that this life energy and force can easily be connected to the sexual drive and sexuality in general, which is not only life-giving but also life-affirming. And yet, it is important to note that the story of Adam and Eve is not about sexual sin but rather a case of disobedience.

Now let us look more concretely at Adam and Eve. The tree of knowledge was not used as bait or temptation, but it was much more practical than that: it may have been a precious source of spiritual nourishment for God himself. Although the serpent is blamed for enticing Eve to later convince and persuade Adam, the situation and circumstances may have been slightly different.

In the beginning, there may have only been Eve (Heva), who was associated with the Phoenician serpent goddess of the underworld and the mother of all living beings. Moreover, as Rank points out, she was the primal representative of the primal mothers, that is Earth, the mother goddess. In a sense then, it is Eve who gives birth to Adam, not unlike the Virgin Mary bearing the (other) Son of Man.

At the onset, Adam meaning “red” and most likely related to red clay or ground, did not have a name. But his name may have been the feminine form “adamah” meaning “moist earth” and from which he himself was formed. In that sense, neither Adam nor Eve would be motherless; the latter an emanation of the earth goddess, and the former then becomes earth and flesh destined to till and cultivate the land. (Technically, Eve would be his divine mother-creator as she has not physically given birth to him; hence, their sexual union would represent at least only ideologically an incestuous relationship.)

According to this interpretation, the serpent and Eve have fused into one. They convince Adam to set on his quest for knowledge, which is in this case, the tree of the forbidden mana. Once he partakes of it, he wakes up from his ignorant bliss and moral torpor and essentially starts the quest for immortality; in the process, he becomes willy-nilly a rival to God who is clearly and perhaps justifiably angered with as well as afraid of this outcome.

So God ensures his own safety and predominance by banishing and banning them both as personas non grata; they would never be allowed to enter or set foot in his realm again. Interestingly, when we say God has created mankind in his own image, from a psychoanalytic perspective, it makes more sense to claim that humanity ends up creating God in their image. And in this way, the divine would become an anthropomorphic projection of humanity’s wishes and desires for omnipotence and even more importantly, immortality.

It is this same desire that is a threat to God and paradise, and it is not as is generally believed a matter of sexual temptation and its subsequent activities and outcomes. Seen from the divine perspective, it is not only a case of disobedience but rather defiance of established rules, orders, and authorities.

Seen in its negative form, it is hubris that can lead to the demise of this carefully constructed creation. The sexual act is equally rebellious as it can ensue from and out of sexual desire, mana-turned-mojo that is activating and charging the libido. But more importantly, it is the life-giving aspect that is of relevance here: with this procreational impulse (as in pro-creation), it is creation that is carried forward and intergenerationally immortalized across many generations.

Ironically, if Adam and Eve indeed had immortality, to begin with, they lost it by seeking it. This may be the doom and saving grace of humanity. Our quest for immortality combined with the fear of death and annihilation keeps driving and propelling us forward in various ways and forms. It is mana-in-action, and without it, we might as well be dead. Genesis represents the birth of humanity, and it started off in its infancy with ignorance and, at the same time, in a state of undifferentiated quasi-mystical identification with the divine.

But we then moved from this state of ignorance to one of knowledge and consciousness and with it and out of it comes the creation, individuation, and differentiation of the self and others. Yet, it remains in our own hands, how we morally use this energy and life force, whether for good or for bad, for growth or for destruction, and this is essentially where free will comes into play, the very soul and essence of who and what each one of us essentially and truly is.

Arash Farzaneh
I am a health and wellness coach as well as a blogger/writer, podcaster, book & movie reviewer, and an educator and language instructor. I am fluent in five languages and have a variety of interests.

I am passionate about health and wellness and practice and advocate psychoanalysis, Intermittent Fasting, nutrition, and mindfulness.

I occasionally write fiction as well, drink wine on a weekly basis and always strive to be the best person I can be!

Promote Your Page Too

Arash Farzaneh
Vancouver, BC, Canada
I am a health and wellness coach as well as a blogger/writer, podcaster, book & movie reviewer, and an educator and language instructor. I am fluent in five languages and have a variety of interests.

I am passionate about health and wellness and practice and advocate psychoanalysis, Intermittent Fasting, nutrition, and mindfulness.

I occasionally write fiction as well, drink wine on a weekly basis and always strive to be the best person I can be!

Introduction to Psychoanalysis, Lectures for Child Analysts & Teachers
by Anna Freud
A simple and straightforward overview of psychoanalysis with a focus on child psychology. Anna Freud's style is clear, compassionate and engaging. I was quite interested in learning about the differences between the psychoanalytic treat...

Zen Buddhism and Psychoanalysis
by Erich Fromm
Each / either field (Zen Buddhism / Psychoanalysis) is fascinating on its own terms but one day I felt that they were intimately and intricately connected and that turns out to be true! Although the book as a brief and general survey mer...

The Path: What Chinese Philosophers Can Teach Us About the Good Life
by Michael Puett

Reconstructing Strategy: Dancing with the God of Objectivity
by Saqib Qureshi

The Routledge Guidebook to Galileo's Dialogue
by Maurice A Finocchiaro